You are here: Home

Why these new jagged sculptures, appearing to some so different from the first ones which were so smooth and so round  ?

And yet, they are the same ones which I re-model in my new compositions. My world was and always is smooth and round, like my previous sculptures, which I still create. By frequently visiting the furnaces I began to like these places which are tough, noisy, dirty, where one gets hurt, creates and sees an artwork being born out of the fire. 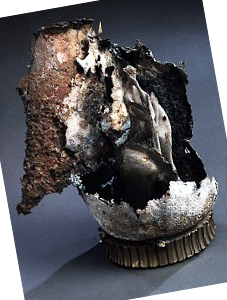 I loved the bits of bronze left behind from the last melting which will then feed the new one. I liked the mechanical parts in bronze which will also be 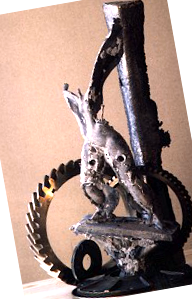 used in the next meltings. And at last I liked my rough sculptures, especially the ones which didn't come out right. Those where the metal is missing, where the bodies look as if some of their parts have been torn out. I didn't want them to go back to the crucible to feed the next melting, neither did I want those toothed wheels and other industrialised parts to go back into the crucible. There is no dip for those brave ones which worked all their life : I believe they have the right to another life. They are beautiful because they have been useful. How many kilometers ? How many years of service ?They are old and they deserve some rest. They deserve serenity.The spouts, the airholes and other bits of bronze left over after they have been removed from the artwork keep in their memory the inprint of the fire, melting metal flowing like water and the natural oxidation caused by the exposure to air. There we have them, fire, water and air : these bits of metal carry in them the three elements which are the basis of magic, of alchemy, of religion and of certain philosophies. This shows how deeply rooted they are in the human. And my unfinished sculptures, to which I am giving birth, still tied to the umbilical cord, they don't breathe yet, but they came out, more or less successfully. I nearly always use the damaged ones, they won't go back to the crucible, they shall not be ill-treated by man or machine until they become like their models. I want to give them another life, protected by water, air and fire and guided by the old generation.
That is why one can perceive in my new compositions the same tenderness, the same taste for happiness, the same strength and the same mood as in the others. Even if the skin is different, the blood always has the same colour.